It’s time to wrap up the Volunteering focused quarter. This one seemed to fly by. It looks like I’m at around 145 hours so far this year, which puts me ahead of last year. Volunteering is my primary method of Being Goode. For me it’s both the easiest and most rewarding. I’ve never donated a lot of money but I always have time to give.

People always ask me how I found my volunteer gigs. I think one way is that I always have my eyes and ears open to possibilities. I volunteer for Crisis Text Line because of an article I found in a magazine. I came across the Invictus games because of a news article about Prince Harry. I started volunteering at 826LA/Seattle because I love the author Dave Eggers and it’s an organization he started. I volunteered at the Cincinnati Ballet because I took ballet classes growing up. A friend helped me get into volunteering at the Special Olympic World Games. I see things and wonder if I can help, and then I follow-up.

Here are some other ways to find volunteer opportunities –

Whether it’s an hour or hundreds I think you’ll find it very rewarding. It’s also something you can put on a resume and a great way to meet new people. Often you’ll find that volunteer can be a once in a lifetime experience.

How do you find volunteer experiences?

It seems like time is just flying by. I’m taking a big test tomorrow to get a professional certification and all my spare time has been going to study for it.

I was in the Laugh Factory here in LA when I found out. The group I was with was making We are Orlando signs and I thought it was strange because I thought it was about the singer who was just shot the other night in Orlando, I hadn’t yet heard. I had been busy putting rainbow eyeshadow on my eyes, securing my tiara, and going over the dance routines for the parade to turn on the news that morning. But I quickly learned that the signs were not strange at all. Our community had been attacked. I was devastated.

But the PRIDE parade preparations continued and we went to the queue area. Then I started to get texts from friends and family asking if I was safe. That’s how I found out that LA PRIDE had been targeted. That they caught someone with a car full of explosives and ammunition headed our way. I thought about going home. I imagined Boston. But then I saw the increased LAPD presence, I got assurance and encouragement from my group’s security team, and I was reminded that the point of PRIDE isn’t just a celebration but a chance to stand together. This was my second time in the LA PRIDE parade and I was ready for the protesters with their little area along the route with their signs and bullhorns chanting we’re all going to hell. I was ready for hate. I know that we’ve come a long way; marriage equality is the law of the land but I know we have a long way to go; conversation therapy is still legal in most states.

I danced my way through West Hollywood again living my dream of being a professional parade dancer. It was a mile of fun and joy and rainbows and connection. Like I’ve said here before after the Paris attacks– art heals. Music and dancing heals. After the parade I went and got Hawaiian BBQ (rainbows aren’t just for LGBTQA) and settled in to watch the Tony’s. I watch the Tony’s every year because I love theatre. I felt it and I saw so many of my friend’s and the world’s reaction to the Tony’s – it was healing. Art heals. There were beautiful acceptance sonnets and songs that had nothing to do with the day’s tragedy. They all helped.

Over the past couple of days I’ve watched the late show anchors and the newscasters react and share and try to find away to talk about this again. Many pointed to the blood drives and the people who lined up around the block to donate. Giving back is a way to heal. Few pointed out that male homosexuals aren’t able to donate. Few pointed out that the people who donated blood last week in Orlando, on just a normal day as something they do, were lifesavers. I hear the stories on the news of the survivors and I’m devastated.

This week I’m wearing a rainbow lapel pin. It feels to me to match the flags flying at half-staff; a gesture of respect. The fight and the celebration continue.

It’s almost mid-June… I can’t believe it’s summer and the year is getting close to halfway over!

Someone asked me the other day why I volunteer. They made some other assumptions but I’ll tell you the real story (as well as I can).

I don’t have the same clarity as to why I volunteer. It’s partially because I always have. I started volunteering with my family when I was around 8 years old. Some if it is because I get to participate in pretty cool events, I used to usher to see plays or the ballet. Occasionally I’ll be invited by a friend. It does look good on my resume and that’s a real benefit. The first answer that always comes to mind is why wouldn’t I volunteer?

I think really though it’s how I feel when I happen to be in the right place, offering the right help, at the right time. When I feel like I actually might be changing the world.

Why do you volunteer? Are we all just crazy?

A bit of a hectic week but with some good surprises. 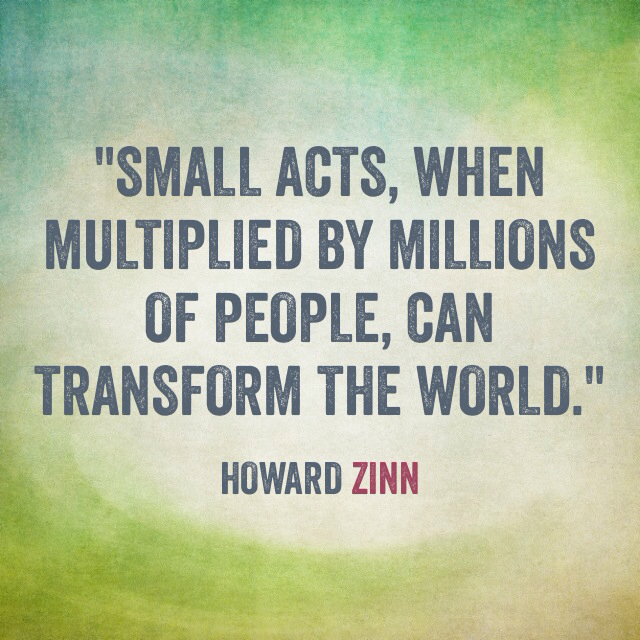 “Small acts, when multiplied by millions of people, can transform the world.”

When I had that awful cold last week (which is still lingering) I started to feel frustrated that I couldn’t help. I get so much joy from being productive and helping others that to have to sit on the couch all day and sleep isn’t something fun for me. Especially after my big amazing week of volunteering at the Invictus Games. I had to cancel my Crisis Text Line shift and my appointment to donate blood and had to end another Crisis Text Line shift early.

Missing my blood donation appointment was hard on me and I’m still looking for a good time to fit it back in but I really do need to feel 100% to donate. Donating blood as much as I’m able is really a big focus for me this year. And of course I got a few emails that this last weekend my blood type was in short supply for platelet donations. I felt even worse.

Then today I came across this Howard Zinn quote and it reminded me to calm down. Two weeks or a month out of the year focusing on myself and my health doesn’t matter. The small things I do the rest of the year can transform the world. I’m one of millions of people who volunteer, who donate blood, who counsel those in need, who help with events. Together we’ve got this. I can take a rest if I need it because someone is out there to help pick up the slack. And when I get back to full health I can give someone else with the helping spirit a little slack when they need it.